The History of Crawfish in Houston

You are here:
Crawfish in Houston 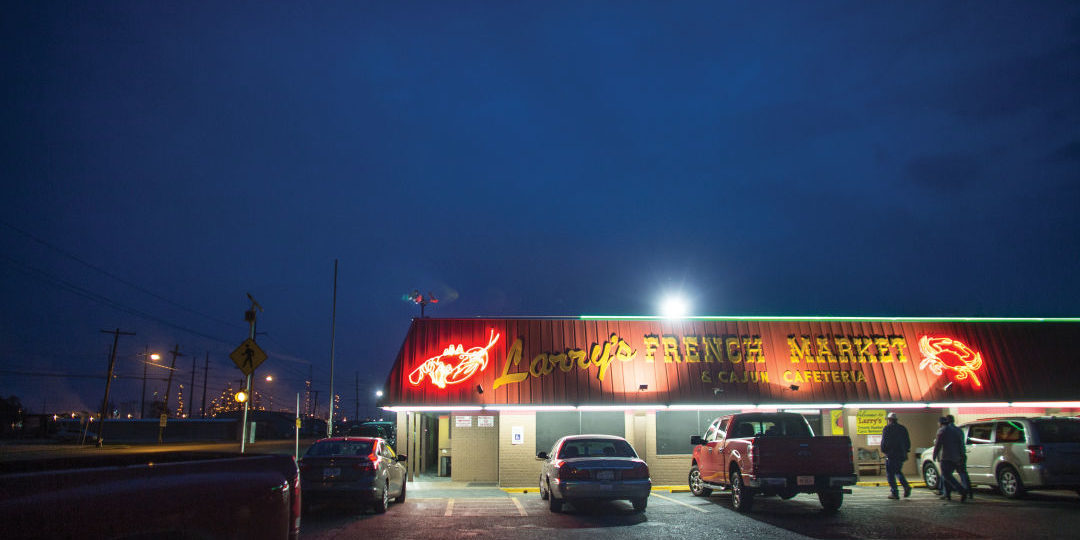 The History of Crawfish in Houston

Cajun crawfish didn’t take off in the Bayou City until 1976, but Houstonians’ appetite for crawfish has exploded since then.

Larry’s French Market’s founder A.J. Judice Jr. was the first to bring crawfish racing to Texas—and the first to serve crawfish here, too. 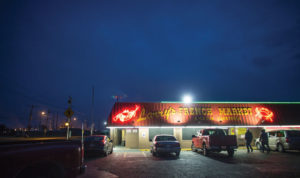 AT YOUR CLASSIC CRAWFISH SHACK, when patrons sit down at the picnic tables spread with newspapers, they don plastic bibs. The idea, of course, is to avoid splashing and staining when huge mounds of steaming goodness come tumbling onto each table. But it’s a losing battle. As the hungry hordes twist each shell apart, squeeze out the succulent white meat, grab it with their teeth, and suck the head for an extra shot of fiery spices, orange cayenne and crawfish goo is going to drip down their fingers, arms and faces and onto their clothing.

If they don’t get anything in their eyes, they’re doing great.

Messiness is just one of the hazards aficionados face come crawfish season. Yes, it’s best to let the piping-hot pile of crawfish, corn on the cob and red potatoes cool off to avoid burnt fingers. But who can wait that long?

The rituals of the crawfish boil trace their roots to the Atchafalaya swamp in western Louisiana and the people who settled there: the Acadians, or Cajuns, who migrated from French Canada and the French-speaking African-Caribbeans, or Creoles, from Haiti and other islands.

Each spring, floodwaters force the crawfish to leave their burrows, and Cajuns and Creoles alike gather them in huge quantities to consume at crawfish boils, big parties where people come together around a huge pot. The traditional season for crawfish coincides with Lent—the 40-day period before Easter, generally from March to April, when Catholics refrain from eating meat—although nowadays, thanks to crawfish farming, it really lasts from January to August.

Comparatively speaking, the appetite for crawfish in Texas has taken hold only recently. It starts with A.J. Judice Jr., better known as The Crazy Frenchman, who, in the early ’60s, first imported bags of crawdads from Breaux Bridge, Louisiana, to his family’s store, Judice’s French Market in Port Arthur. In 1978, when he opened another store with his son Larry, Larry’s French Market, he served them there, too.

A born promoter, Judice brought the sport of crawfish racing to Texas in 1963. The racers would paint a name or number on the shell and dropped the crustaceans in the center ring of a target-shaped racecourse—first one to leave the outer circle took the purse. Texas Gov. Preston Smith later appointed Judice a Texas Crawfish Racing Commissioner, to “ensure that no unscrupulous characters got into the crawfish-racing industry in the great state of Texas.”

The cartoon image of the Crazy Frenchman in his signature red butcher’s apron and black beret can still be seen on the walls at Larry’s, in the Groves section of Port Arthur. This past October, Houstonian Richard Carrier and his son Nick, a graduate of Houston Art Institute’s Culinary School, bought the place. When I visited recently, chef Nick told me he had great respect for the history of the restaurant and planned to keep everything exactly as it was.

The original Ragin’ Cajun on Richmond hosted the city’s first crawfish boil in its parking lot in 1976, when the restaurant was still called Ray Hay’s Cajun Poboys. When Luke Mandola Sr. changed the name in 1981, the rechristened restaurant was the first in the city to offer crawfish on its menu.

As for the Bayou City itself, Cajun crawfish didn’t take off here until 1976. It was then that a restaurant called Ray Hay’s Cajun Poboys—owned by Luke Mandola Sr., Frankie Mandola and Ray Hay—started hosting springtime crawfish boils in its parking lot. The boils soon became popular with Louisiana natives who’d moved to town with the oil boom. The restaurant, which later changed its name to Ragin’ Cajun, became the first Houston joint to put crawfish on the menu. The big red mudbug sculpture above its front door reminds you that crawfish are still the thing to get there.

Still, it took some time for mainstream diners to come on board. “We tried serving crawfish when we first opened Landry’s in the early ’80s, but nobody would eat them,” remembers Jim Gossen, whose Sysco Louisiana Seafood company is one of the state’s largest crawfish suppliers. “We ended up using them as a garnish or throwing them away.”

Today, Houstonians eat an enormous amount of boiled crawfish every year. Gossen believes he knows why the tradition finally took hold. It was in the early ’90s that demand exploded, around the same time that prices shot up for Texas blue crabs, which were being bought up by Maryland crab houses. So Gulf Coast crab shacks added crawfish to the mix.

“People in this part of Texas used to sit around for hours eating boiled or barbecued crabs and drinking beer,” he says. “My theory is that the crawfish replaced the crabs.” Freshwater crawfish, Gossen explains, are now considered seafood in the restaurant business.

The Vietnamese crawfish craze, which took hold in Houston around 2001, has recently started to dominate the conversation. In fact, many younger locals have little memory of eating Cajun-style crawfish. But if the names of such Southeast Asian eateries as Cajun Corner and Crawfish and Beignets aren’t enough to remind you where the mudbug culture started, then maybe a tour of the area’s Cajun crawfish joints (see opposite page) will set you straight.

When did the Crawfish Boil Begin?
November 5, 2020
CRAWFISH DIRECTORY
Go to Top